OVERWHELMING SUCCESS AS LEONORE IN NANTES AND ANGERS

Fulfilled, invigorating, familiar with her task, Claudia Iten is Fidelio. Her much-anticipated ‘Komm Hoffnung’ is a highlight. (...)We have here a genuine lyric soprano with a Wagnerian accent. (ForumOpera, 16th March 2018)

Claudia Iten is Fidelio, a great lyric soprano, young and vivid, whose voice has beguiling colours across its wide range, from an easy high register to sustained low notes. Her ‘Komm Hoffnung’ has a touching sincerity (…) her Fidelio is the real thing. (classiquenews, 19th March 2018) 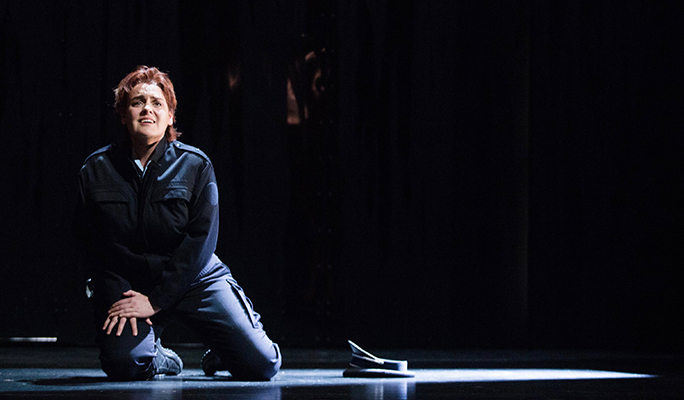 After the big success as Leonore in Rennes 2017, Claudia Iten will be guest artist at the opera de Nantes-Angers and will sing the role of Leonore.

OVERWHELMING SUCCESS AS LEONORE IN RENNES

The new staging of Beethovens's Fidelio was an overwhelming success for Claudia Iten as Leonore.

"To conclude, Claudia Iten was the discovery of the evening. She is making a name for herself in German theatres: she has an exemplary technique and a clear, iridescent voice. In the first act she showed quite Mozartian restraint, and she was not fazed by the dramatic demands of act two. This was a vocal portrayal of Leonore which was both very accomplished and attractive. She contributed to the success of an evening which was a triumph in musical terms."
resmusica.com, March 17, 2017

"Claudia Iten gave us a vocally magnificent Leonore, her radiant timbre seeming to stand as a metaphor for this wife imbued with hope. Her transparent delivery, her precise projection, the accuracy in melismatic passages, her command of nuance, all gave a depth of emotion to her portrayal, and explained why she is in such demand in this role on the world’s stages from Bogota to Cagliari (...)."
ForumOpera.com, March 19, 2017

In March 2017 Claudia Iten will be guest artist at the Opéra des Rennes.

In a new staging she will appear as Leonore in Ludwig van Beethoven's opera Fidelio.
With the same role Claudia had a great success at Teatro Colón in Bogotá in September 2016.

On Saturday, November 12, 2016 Claudia Iten will sing the soprano part of Antonín Dvořák's Requiem
in St. Laurenzen in St. Gallen.

CLAUDIA ITEN AS LEONORE IN BOGOTÁ

In September 2016 Claudia Iten will give her debut at the Teatro Colón in Bogotá
where she will appear as Leonore in Ludwig van Beethoven's opera Fidelio - a role with which
Claudia Iten already had great success in other productions.

>>> Fidelio at the Teatro Colón Bogotá


CLAUDIA ITEN ABOUT THE ROLE OF ISOLDE

Interview in the "Gazzetta di Modena"


CLAUDIA ITEN AS ISOLDE IN FERRARA

In the Teatro Communale Luciano Pavarotti in Modena Claudia Iten will appear as Isolde on November 11 and 15, 2015 in Wagner's Tristan und Isolde during a tour of the Staatstheater Nürnberg.

The performances will be conducted by Marcus Bosch, the stage direction has Monique Wagemakers.

In January 2016 the production will be presented twice also in the Teatro Claudio Abbado in Ferrara.